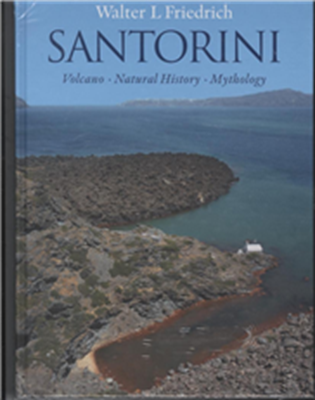 When the Greek island of Santorini, classically known as Thera, erupted dramatically in 1613 BC (+/- 13 years), it produced one of the largest explosions ever witnessed, thereby possibly giving rise to the legend of Atlantis. This so-called 'Minoan' eruption triggered tsunamis that devastated coastal settlements in the region, and on Santorini it left behind a Bronze Age Pompeji, which is currently being excavated. Thriving Bronze Age settlements on the island - rich in colorful wall paintings and highly sophisticated pottery - were buried under thick layers of volcanic ash. The ejection of an immense volume of dust into the atmosphere also altered global climate for several years.

The author, a well-known geologist, blends the thrill of scientific discovery with a popular presentation of the geology, archeology, history, peoples, and the environmental settings of the island group of Santorini. He not only gives a comprehensive overview of the volcanic island and its past, but also reports on the latest discoveries: The finding, for example, of the olive trees which had been buried alive by the Minoan eruption has made it possible now to give a direct and precise radiocarbon date for the volcanic catastrophe. Furthermore, he seeks to assign certain geological structures, such as faulted rocks, red lavas and harbor sites, as depicted on the Bronze Age frescos from Santorini, to still-existing details in the Santorini landscape of today.

Excellent color photographs and illustrations along with easily understandable scientific and historic details will make this book highly appealing to a wide audience. It will also be useful as a supplementary text for introductory courses in earth and atmospheric science, geology, volcanology, and paleoclimatology, as well as ancient history and archeology.